„Do you know Ernst Toller?“ asked the friend who lent me All that I am by Anna Funder. I didn’t – but now I do. Both the person that lived in Berlin and emigrated and the fictional character in the book. Deeply human, successful, flawed – and betrayed by life. Anna Funder doesn’t judge her characters – she lends them her voice and brings their reality to us. A reality that allowed some of them live and sent some of them to an early or later death. This book pays tribute to the free spirits in Nazi Germany and raises the all-important question once more: „What would I have done back then? Who would I have been?“ Everybody has to answer this question for themselves – and for a moment feel alone like the characters in the book when they have to decide in which direction to go. „These objects made sense only to Ruth; Ruth held them together in a constellation of story.“ This is what it means to have a place in life as a human being. When we’re alive, the objects are meaningful to us and we make sense of them for others. Maybe these objects tell a story to the next generation – or maybe they are lost or „junk“, when we leave this world.

I took Anna Funder’s book with me on a trip to Weimar & Buchenwald. And wondered about the origins of this broken piece of china on the grounds of the former concentration camp. 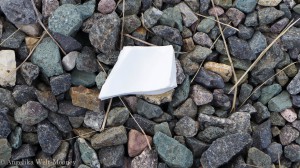